Of course I tired out the Developer Preview too. But it was very much not ready, and I really couldn't muster out much more than a "ah, I wish I had a touch screen" and "geez, this will take some getting used to" with it. Those feelings remain, the first and initial impressions, with the consumer preview too, of course, since it is the same Metro UI and thus would really be much more awesome with a touch screen. 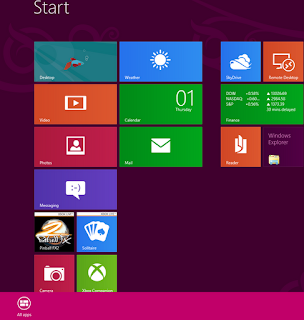 I've had the Nokia Lumia Windows phone for a few months now, so by no means is the Metro UI foreign to me. As a mobile device platform. But as I started to look at Windows 8 from the perspective of a desktop platform, the whole idea took me some getting used to. And it isn't over yet.
All the time as I was fiddling with it, I needed to remind me that this is something I actually should be able to use for similar kind of functions as I use my Win7, not (maybe only, if I manage to get myself a Win8 tablet at some point) for similar things as I do with my phone. It is a bit of a task, when the UI so persistantly functions in the way of a mobile device instead of a PC.
Where, for example, is the Exit or Close in applications? Start screen with the Metro tiles, and the All Apps alternate view is fine, applications are easy to launch and all. And there's a desktop and the old way to look at many, if not all, things. And cool new features you can even use with the mouse, eg. for returning to the Start screen or Desktop or to the last used app or whatnot.
But the one thing I sincerely miss in all of my mobile devices too, is the option to actually exit an app, not just return to the home screen and then close the apps at some point, using the Task Manager or the little screen that pops up in the upper left corner of the Desktop. 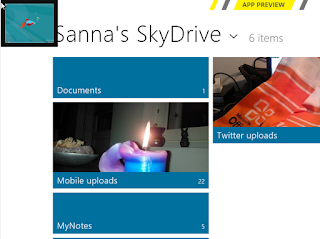 And I admit that I actually missed the task bar. Sure I can navigate from app to app using the keyboard shortcuts, but as I happen to be as I am, a very visual person, I like to see what apps I am running and, yeah, navigate to the apps using the task bar. So far I did not find an option for using a task bar. Not that I really looked for it that hard, though.
I am coming off in a very Finnish way here, bringing out the negative first. Oh well, that done, we can focus on the good. Which is, in a general sense, the rest of it. Most probably some other details that are not to my liking will emerge at some point, but so far so cool! I like the Metro UI on my phone, I like it as a consept, I'm sure I will get used to it as the UI on my PC too (when the time comes, for now, it is installed heretically on a VirtualBox machine).
The beauty of the Metro UI lies in its simplicity. Simple design, straightforward user experience - for the most part ;) It has the potential to revolutionize the PC experience.

[Also published in So Tech Me: First Impressions on Windows 8 Consumer Preview]