One of the big new things in SharePoint 2013 is option too create MasterPages as plain old HTML files and let SharePoint then convert them to .master files, adding all necessary asp.net code into the file. How this works, is that basically any web developer can create a master frame in HTML, without needing to worry about the SharePoint specific stuff at all at that point. Then that file can be converted in SharePoint, and the needed SharePoint controls can be added to it as ready-made snippets.

As a professional doing SharePoint branding solutions, my first question here was "why? why would I want to do it like that?" And after trying it out, I concluded that most probably in most cases I wouldn't. But it doesn't mean that someone else wouldn't.

Let's take a look at this scenario:

There is company A who decides to go into SharePoint Online with their intranet site. They use an advertizing company B in all their design, web and otherwise. So with this new intranet project they turn to their ad company B for a fresh design for the intranet in Office 365 SharePoint Online.

With 2010, what would've happened is that the ad company B would've made a nice intranet site design, which would've been delivered to company A as image files and probably a PhotoShop layout file. The company A would've partenerd up with company C to create the branding for the site as a sandbox solution since you cannot deploy farm solutions to SharePoint Online.


On both occasions, I have stressed the still standing option of creating and using a .master instead of the HTML with the snippets. The reason behind this is that I don't see the latter option necessarily as the best one when the one creating the MasterPage is actually capable of doing it the old-fashioned way. Why is this?

Because, even though the converted HTML Master is a completely valid MasterPage, and the snippets relatively easy to add per se, the process is not an altogether simple one. 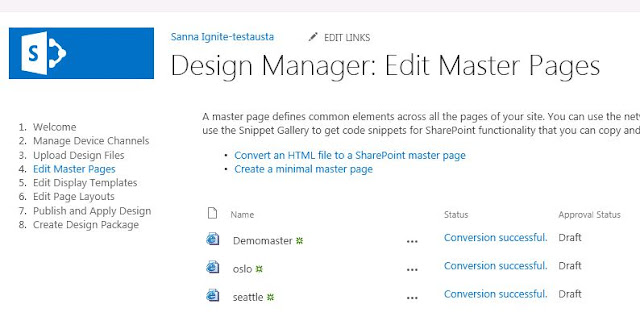 The look and feel of the controls can be customized before copy-pasting the code snippet to the MasterPage. But this creates a whole lot of inline styling to the control, on the MasterPage, so if later on company A decides to do a facelift to their site, instead of some centralized changes in the CSS file, the actual MasterPage needs to be edited.

With this, I also encountered a problem that if I changed the inline code straight on the MasterPage, my changes did not take effect; I needed to customize and copy-paste the snippet all over again (don't know if that was some bug of that specific environment; it was RTM, though). 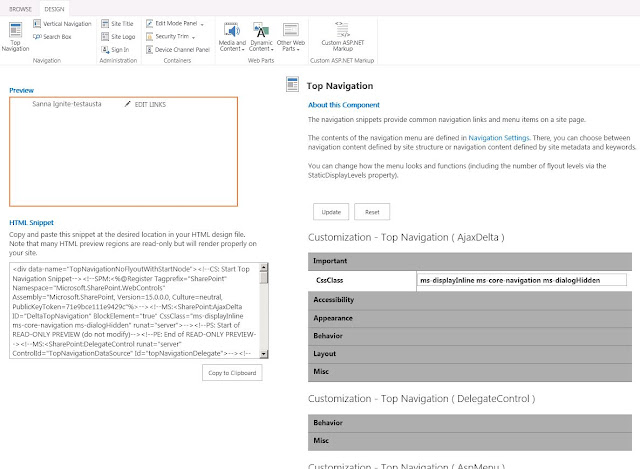 You can preview the MasterPage in the browser while working with the snippets. But in order to do that, you need to open the converted HTML file for editing ( edit the masterpage, you DO NOT open the .master file).

Which means that you need to open the file form the Master Pages and Page Layouts Gallery. Unfortunately there still is no way to open a file for editing if you open this gallery in the browser (like the Design Manager suggests), so you are faced with a few options:


After tackling these two issues in a satisfactory manner, you are well on the track with creating the MasterPages as HTML instead of using Visual Studio to create .master files. There is a time and a place for everything, and that applies to HTML MasterPages too. Oh, and mind you: the Design Manager is only available on publishing sites (or when publishing infrastucture is enabled).